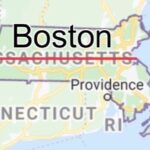 STATE HOUSE, BOSTON--In an unexpected but, honestly, totally valid move, Commonwealth legislators announced on Monday they are "actively considering" changing the name of Massachusetts to Boston. "No one from outside New England can name a single place in Massachusetts besides Boston--so why don't we just lean into that?" said one lawmaker, who lives in Medford but tells all … END_OF_DOCUMENT_TOKEN_TO_BE_REPLACED