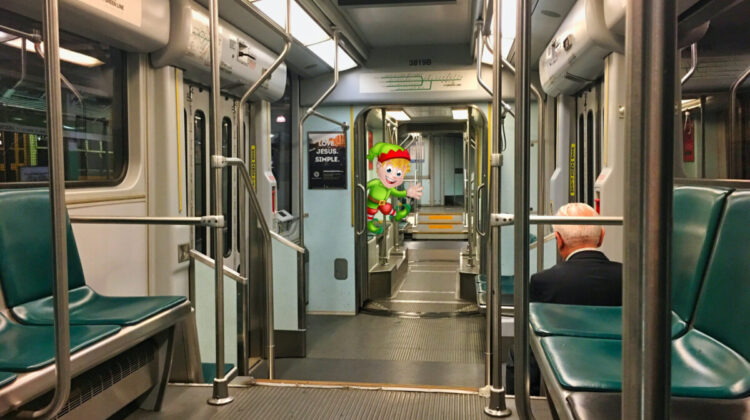 BOSTON, MA – Ever wondered who reads the gargled MBTA stop names you strain to hear each morning? Look no further than Peppermint Sugarplum, the little elf who lives inside the T train speakers. This week, we tracked down the spritely and elusive elf for an exclusive interview about his job, life, and motivations.

“My career started when the faeries, beasties, and elves were banished from the Enchanted Forest after it was paved into the Quincy Center parking lot,” said Sugarplum from his cozy home inside an Orange Line speaker box. “From then on, I sought to stir up mischief for the Big Folk, who took oh so much from me and mines. So I stole a microphone device, hid meself in a speaker, and took to muttering stop names as unintelligibly as my liddle elven lips could.”

Sugarplum cited years of experience stirring up mischief, hijinks, and impishness as a source of inspiration for his work. “I’ve always been a wee bit puckish,” he admitted with a chuckle.

“My work days begin at dawn. Usually, I’ll start each morn’ with a nice and clear, ‘Entering: Park Street. But with just a sprinkle of fae magicks, I start to change me voice and eventually just mumble out incoherent directions and line cancellations. The Big Folk simply haven’t a clue what to do with themselves! Fiddle dee dee!”

The hardest part of Sugarplum’s job is finding time to magically teleport to spread trickery and waggishness to  every single part of the sprawling subway system. But, he says, the results make it worthwhile.

“It fills me with such glee to watch the treacherous tricks I set into motion. What fun! What vim! What chaos! It reminds me of the time I scared the Hill Giants away from the Great Mushroom Village with naught a tool but my own pluck!”

“Though I wasn’t able to defend it forever,” Sugarplum mentioned meekly. “The Village is now a piss-soaked Downtown Crossing stairwell.”

In light of the COVID-19 outbreak and reduced ridership, Sugarplum has recently been forced to take his mischief outside of the MBTA. “With nary a soul riding the trains, I’ve started pulling socially-distanced pranks on Big Folks in the surfacelands above me. Like this one, watch!”

In a flash of light and smoke, the elf disappeared, leaving behind only a faint echo of laugher.