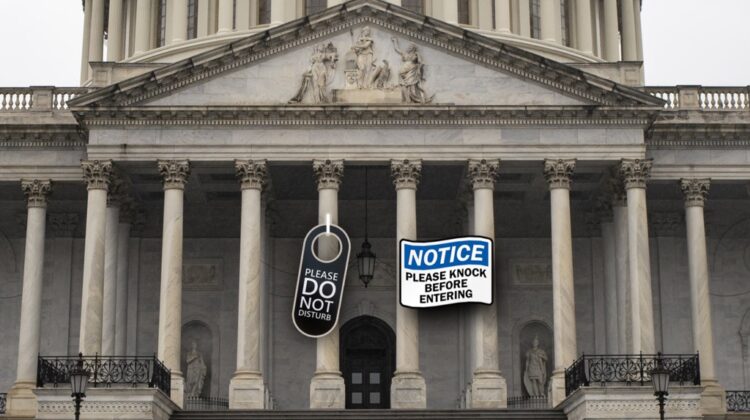 WASHINGTON D.C. — After the U.S. Capitol was overrun with rioters and terrorists seeking to overturn the certification of the 2020 election, the Capitol Police Force has announced that billions of dollars will be invested in state-of-art anti-door-opening technology.

Today, the Force unveiled their new high-tech security measures for the next Republican insurrection: two large, intimidating cardboard signs. One reads “Please Do Not Disturb,” and the other menacingly says “Notice: Please Knock Before Entering.” These are the harshest measures taken in response to a majority-white gathering since Rascal Flatts was banned from Sedona, AZ, in 2006.

“We obviously can’t use our guns or any kind of force on these people—they have families to go home to, after all,” said Deputy Robert Larson, who just returned from a three-month paid administrative leave for beating an unarmed BLM protester. “So we figure we’ll just try to ask nicely next time, and if that doesn’t work, we’ll reassess.”

The Deputy also confirmed the posters each cost $120, and the rest of the $3 billion would go toward retainer fees for a public relations agency for the foreseeable future.