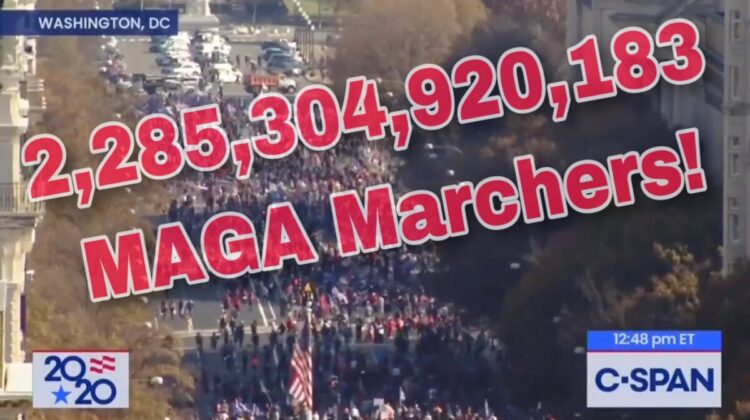 WASHINGTON, DC — Trillions of Trump supporters have marched on Washington D.C. demanding an accurate count of the Presidential election.

The protest is approximated to be largest gathering of humans ever, and the crowd is united over one goal: to make sure that every legal vote in the presidential election is correctly quantified.

“The 2.3 trillion of us only want one thing, and that’s an accurate vote count,” said avid Trump supporter and Million MAGA March attendee Randy Bronson. “We outnumber libs at least 1,000 to one and any suggestion otherwise is a lame stream media lie and I’m done listening.” Bronson told our reporters the march attendance total was tallied by experienced Republican poll watchers.

At press time, more than a trillion March attendees were watching Fox News on their phones while simultaneously chanting “F**k Fox News.”

Source photo credit: CSPAN (screenshot with added text overlay). We are not affiliated with CSPAN nor do we own copyright of this image