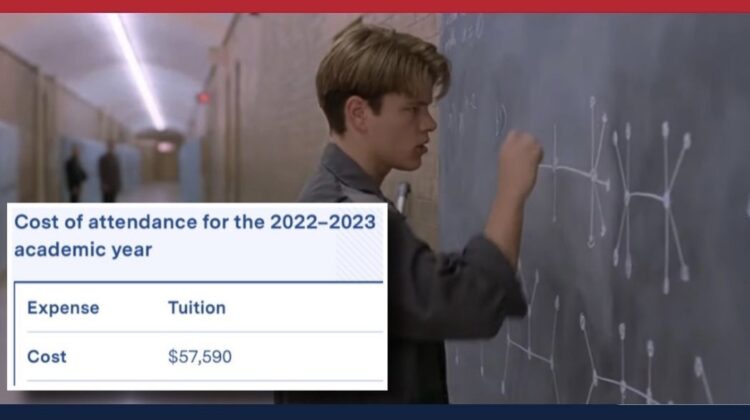 MEDFIELD, MA — Local parents Wilson and Laila Ryerson have been watching college tuition rise exponentially for years. They’re now starting to wonder if maybe their teenager would be open an alternate path into elite institutions.

“So I’m looking at our college savings account and realized we’ve only got a couple more years to save and a long way to go. So I decided to start brainstorming. I’m thinking hard, then suddenly it hits me: You know that movie? ‘How you like ‘dem apples?’” said Wilson doing his best Matt Damon impression.

“So I says to myself, ‘hey, our kid’s a scrappy little smartass! Why can’t he be a janitor too?’ I’m not saying it’s got to be MIT but maybe just like Hampshire or something?”

Wilson’s wife Laila, well aware of the financial trainwreck ahead, is open to all suggestions.

“Look, I’m willing to try anything here. Aiden doesn’t have the grades for a scholarship. We’re not poor enough for good financial aid. And we’re definitely not rich enough to donate a dorm and bribe our way in. Maybe this ‘smart janitor’ idea Wilson keeps harping on isn’t so dumb? What’s the worst that could happen, he learns how to actually use a mop?”

Aiden, their teenage son, isn’t quite as fond of this scheme.

“I don’t even want to go to college. I’m already a brand ambassador for my buddy’s company that sells hot sauce-flavored vape cartridges called Hot Hitz. And I doubt some square from Harvard can teach me how to dougie while keeping the product centered in shot for my story. Plus, I’ve already got like 10,000 followers,” he said with a smirk. “Oh, my dad’s stupid janitor idea? I don’t know about all that. I barely know how to sweep, let alone do calculus.”

As Aiden left the room, he overheard his father explaining the plot of ‘21’ to his mother. “Honey, I saw another movie about paying MIT tuition! Maybe if the kid can’t prove theorems, he could at least learn to count cards?”