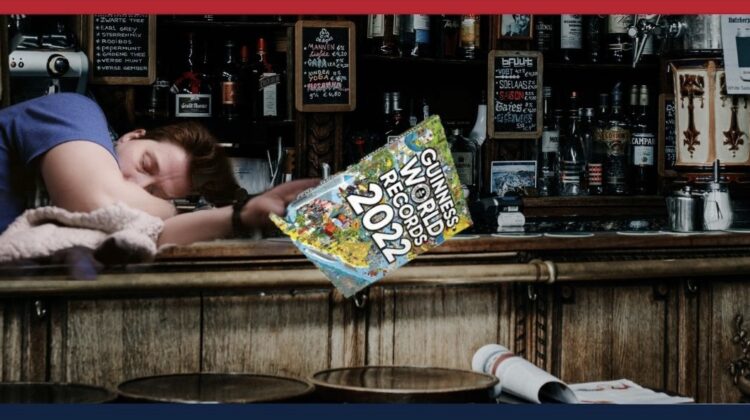 Stone-cold sober party animal Kayden Quinn shocked onlookers this St. Patrick’s Day as he pulled up a barstool at Bukowski’s and proceeded to read the 2022 edition of Guinness World Records until passing out.

“Kayden’s a regular – Usually just orders chili and a water without making eye contact,” said bartender Collin Mullen, wiping a pint glass. “But today is St. Paddy’s Day so I guess he was looking for a party. He ordered a Sprite with ‘no chaser’ and pulled out a copy of Guinness World Records. I usually don’t allow those at my bar – that ‘most toothpicks in a beard’ record always ruins my night. But I like the guy. I figured he could hold his records.”

Patrons at the bar soon realized that Kayden was over the legal limit of curious factoids.

“At first, he was going on about this parrot that could open thirty-five soda cans in one minute – he even tried doing it with a stranger’s Narragansett while screaming, ‘Poly wants an oyster cracker,” said one bar regular. “He finally passed out mumbling something about one-finger pushups. I can’t believe Collin let him bring Guinness World Records in here. One mention of the world’s largest condom and idiots always start swinging their facts around.”

Quinn’s night ended when he tried reaching behind the bar for some toothpicks.

“I made him drink some water, called an Uber, and took the Guinness World Records away from him,” said Murphy. “No way the kid remembers a single record tomorrow.”