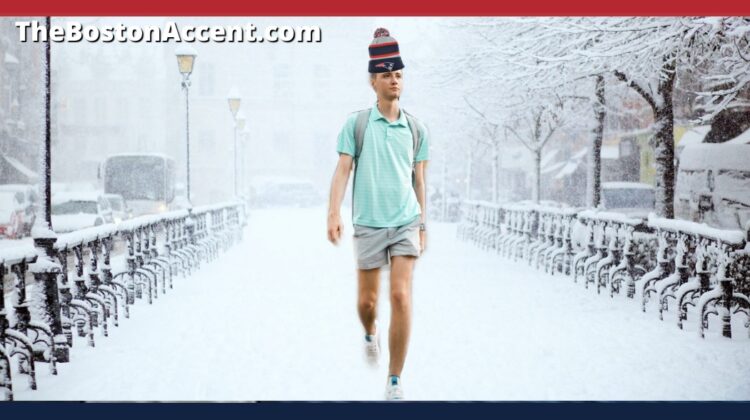 New Englanders get to experience all four seasons, whether we like it or not. Sure, all states technically have a winter, but let’s be real: 65 degree evenings and slightly fewer alligator attacks don’t count (Cough…Florida…cough). Here are seven surefire ways you can tell a New England winter has officially arrived, without looking at the thermometer.

One of the teens at the bus stop isn’t wearing shorts
A certain sign that freezing temperatures have arrived is when you look out at the crowd of high schoolers near the bus stop and notice one of them has eschewed traditional year-round shorts for long pants. If two of the kids are wearing pants, you’d better grab your mittens. If all of them are wearing snow pants, the next blizzard of ‘79 might very well be upon us.

Is this one a Mandela Effect or real? We’ll never tell!

Beautiful reflective poles start sprouting from lawns
On the winter equinox, New Englanders plant long, reflective poles on the edges of their lawns in a desperate attempt to keep snowplows out of their living rooms. However, much like laser pointers to cats, these reflective poles too often become mesmerizing to the snow-blinded drivers, which is why everyone also keeps backup poles in the garage.

99 Restaurants puts duct tape over the seafood section of their menu
Similar to McDonald’s ice cream, you will hardly ever find good New England clam chowder on the menu when it’s actually the right temperature outside to enjoy it.

Someone in your car orders a hot chocolate at Dunkin Donuts
Did you know it is required by law in New England that every Dunks order contains at least one iced coffee? Bet they didn’t teach you THAT at Harvard, egghead! However, this little-known policy has a seasonal loophole: one person per vehicle may order a hot chocolate instead of an iced coffee between December and March. Do not push it though: the fine for an unaccompanied April hot chocolate is $15,000!

Other drivers don’t roll down their windows to swear at you
Road rage–much like sports rage and tea rage–is an integral part of New England heritage. Winter, though, brings a nice reprieve, as the swears aimed at you are muffled, as most people won’t roll their windows down once the mercury touches 20. This is because it’s (a) below freezing and (b) no one clears their side windows off, so rolling the window down means snow will fall inside their lap and get in their iced coffee OR hot chocolate.

Exclusive for 2022: You finally get the results of the PCR Covid test you took before Thanksgiving