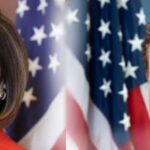 In an unexpected move, Nancy Pelosi “totally punked” Massachusetts politicos on Thursday afternoon by endorsing Joe Kennedy III over incumbent Ed Markey in the Commonwealth’s hotly contested Democratic primary for US Senate. Her statement was widely met with confusion, as it contradicted the Democratic Party policy to endorse incumbent candidates. But according to unnamed … END_OF_DOCUMENT_TOKEN_TO_BE_REPLACED