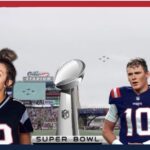 FOXBOROUGH, MA – After Mac Jones threw 3 touchdown passes to lead the Patriots to a 45-7 victory over the Browns, Patriots fans all over New England proclaimed bragging rights to their newly confirmed football dynasty, who surely will never lose again. “Four in a row, baby! Gas up the Duck Boats!” yelled one fan outfitted head to toe in Patriots gear, standing on the hood of … END_OF_DOCUMENT_TOKEN_TO_BE_REPLACED