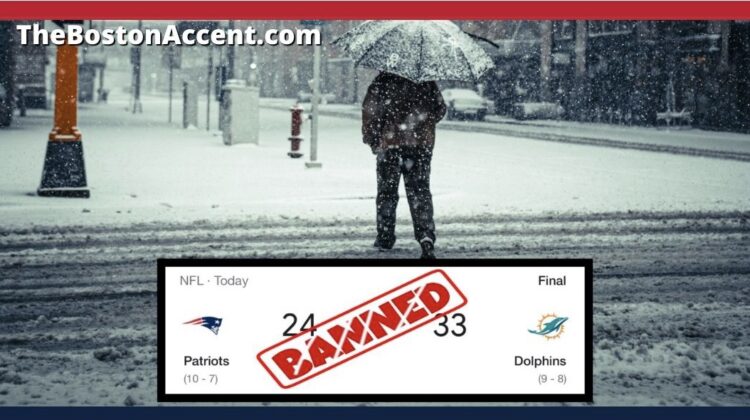 FOXBORO, MA — Fed up residents across Massachusetts are hoping a tough weekend for both weather and the Patriots will help spark change in the Bay State. The “Snowbody Wins” bill, bill proposed Sunday night, could ban Patriots losses on the same weekend there’s a snowstorm.

We spoke to William Fitzgerald of Taunton, who told our reporters he supports the bill. “I’ve lived here my whole life so I don’t mind having to shovel my driveway on occasion. But I shouldn’t have to then go watch Jalen Mills play worse than my niece at her YMCA flag football game. If it snows 6 inches or more, the Pats have to score.”

The potential law also appears to have bipartisan support. One lifelong libertarian from Newton added his backing.  “I disagree with any government oversight with every fiber of my being.  However, if I’m pulling out my snowblower, then I better see at least two touchdowns from Mac Jones and get that free Dunkin coffee on Monday. This bill is about human decency, bottom line.”

At press time, proponents for the Snowbody Wins bill were busy brainstorming how to make the legal case that a Pats loss after snowstorms meets the criteria of cruel and unusual punishment.