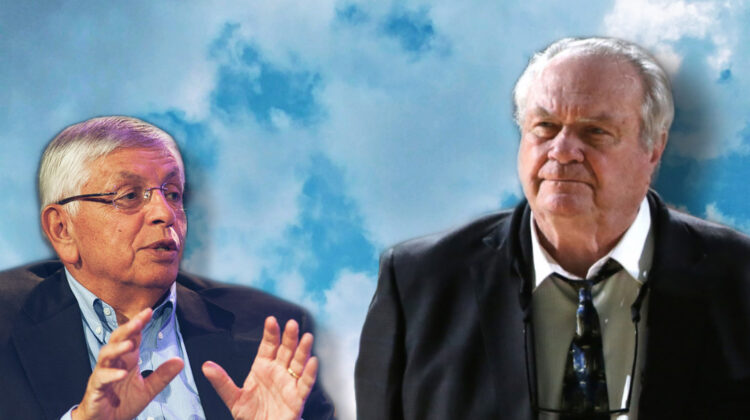 HEAVEN—Celtics legend Tommy Heinsohn, who passed away last Tuesday at the age of 86, spent his first week in heaven giving an earful to former NBA commissioner David Stern over decades of missed calls against his beloved team.

Heinsohn’s arrival at the pearly gates—painted purple and gold, much to his chagrin—occurred only ten months after Stern’s passing. In fact, rumor has it that the timing of the six-time All-Star’s death was in part due to his eagerness to give Stern “a piece of [his] mind.”

An eight-time NBA champion who later coached Boston to two more titles in the 1970s, Heinsohn kept a running tally of every perceived slight to Lucky the Leprechaun over the last four decades in a hardcover journal as thick as Moby Dick.

The first entries date back to the early 1980s, the beginning of Heinsohn’s color commentary career alongside Mike Gorman in the old Boston Garden.

Sitting on a cloud bench next to Stern, Heinsohn read aloud that Larry Bird’s fight with Dr. J in the fall of 1984 should have resulted in much more than a $7,500 fine for the Philadelphia 76ers. “They shoulda tossed him then and there!” he said. “And Dr. J fouled Larry to get it started, not the other way around. Bogus, all of it!”

At one point, a curious Stern asked Heinsohn’s opinion on Kevin McHale’s notorious clothesline of Lakers forward Kurt Rambis in Game 4 of the 1984 Finals, and how he received only a common foul for the act. “They called a foul, what else do you want?” he shot back. “You gotta be suspicious of guys on that team catching the acting bug, it is Los Angeles after all.”

Among Heinsohn’s most recent entries was when Toronto forward OG Anunoby hit Kemba Walker’s arm on his drive to the rim in Game 6 of last season’s Eastern Conference Semifinals.“Atrocious!” Heinsohn exclaimed. “Total hogwash!” He added that the NBA’s later admission that they did, in fact, miss the call earned them a “Tommy Star,” worth one-third of a “Tommy Point.”

As their conversation drew to a close, the two came across Kobe Bryant shooting free throws on one of the infinite number of basketball courts in heaven. “Over the line!” Heinsohn called out, prompting Kobe to glance downward at his feet. “Ha! Made you look!”

Photo: A small portion of the featured image was adapted from a Getty Image CREDIT: MIKE LAWRIE