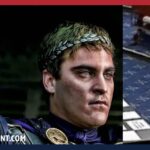 “Some people thought I was paying tribute to John McCain’s thumbs down of repealing the ACA. Boy are those people wrong!” Said the Arizona senator, one of eight democrats who voted against gradually raising the Federal minimum wage to $15. “I loved Gladiator and that emperor was totally in love with power and human suffering. He was my real inspiration.” All … END_OF_DOCUMENT_TOKEN_TO_BE_REPLACED